I slept a little better due to my complete exhaustion from the day before. Around 8:30am I made the now habitual short trek to the congress venue propelled by iced coffee. I sat down across from my opponent about two minutes after 9pm. As with the previous round, I created the kifu with my iPhone via SmartGo. Today’s opponent was another 7 kyu but this time I played white. While the 7.5 komi is certainly adequate compensation from a quantitative point of view, you still have to deal with the psychological advantage that black gets by dictating the opening of the game.

My opponent played the Sanrensei.

With a slight sinking feeling I knew I had a very long fighting game ahead of me. Indeed, I once again ran down my clock to the last byo-yomi period. While I didn’t check, I’m pretty sure my opponent was doing great on his time as he played his moves pretty quickly. This game record isn’t complete because I just didn’t have time to tend the record as the game was clearly extremely close and I had to make all my endgame moves in under 30 seconds. I also didn’t have time to count during the last 20 minutes or so of the game so when we got to counting I knew it was going to be a couple of points either way. With some apprehension I watched my opponent count my area and then I counted his. I ended up winning by 3.5.

While I was happy with the win, I admit I felt pretty unsettled during the entire game because I don’t have much experience with the Sanrensei at all. I also felt my opponent was a bit more aggressive then yesterday’s opponent and I had to wrack my brain for ways to prevent them from controlling the game direction from beginning to end. I also spent a very long period of time working through many different possibilities for reductions which seemed critical for keeping things balanced. I hope the choices I made were reasonable but I won’t know for sure until the review which will have to wait until tomorrow since I opted to play a simul against Lee Dahye at 1pm. I plan to get insights from Feng Yun or Yang Yilun tomorrow afternoon about this game as well as the third round so you will see that commentary in this embedded record in the near future. 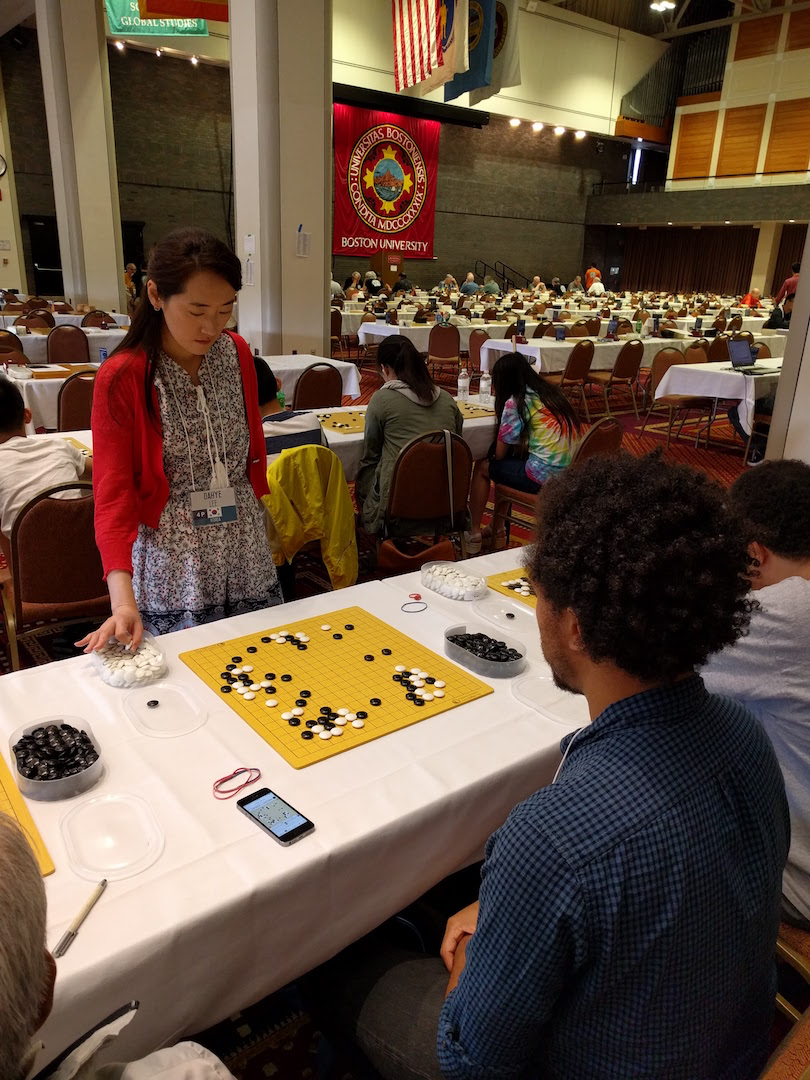 I grabbed a tasty Chinese lunch across the street from the congress with my Go buddy (Ien Cheng) and a new friend Ethan from the NYC Mostly Go Meetup. While scarfing down double cooked pork we all talked about our love for the game and our various approaches to self-improvement. As we were finishing Stephanie Yin 1P came in and we chatted briefly about her new Go school in Flushing, New York! We plan to check it out at the soonest opportunity.

At this point it was getting close to 1pm so I walked quickly back to the main hall where the tables were prepped for the pro simuls. There’s a first time for everything, and this was my first time to play a simul game with a Korean Baduk professional. I prepared the board with the recommended 6 stone handicap for my declared rank. During simul games the professional moves briskly from board to board spending only a couple of seconds before playing their move. When they arrive at your board you should have your response prepared and play it immediately. This means the pace of the game is pretty fast even with six people playing the same pro. But it also makes the game a whole lot of fun! And even though Lee Dayhe played six congress attendees at the same time, after each win (she didn’t lose to anyone) she would spend 5 minutes reviewing critical moments of the game with perfect recall - this was really astounding to behold. I’ve embedded her commentary along with the record. 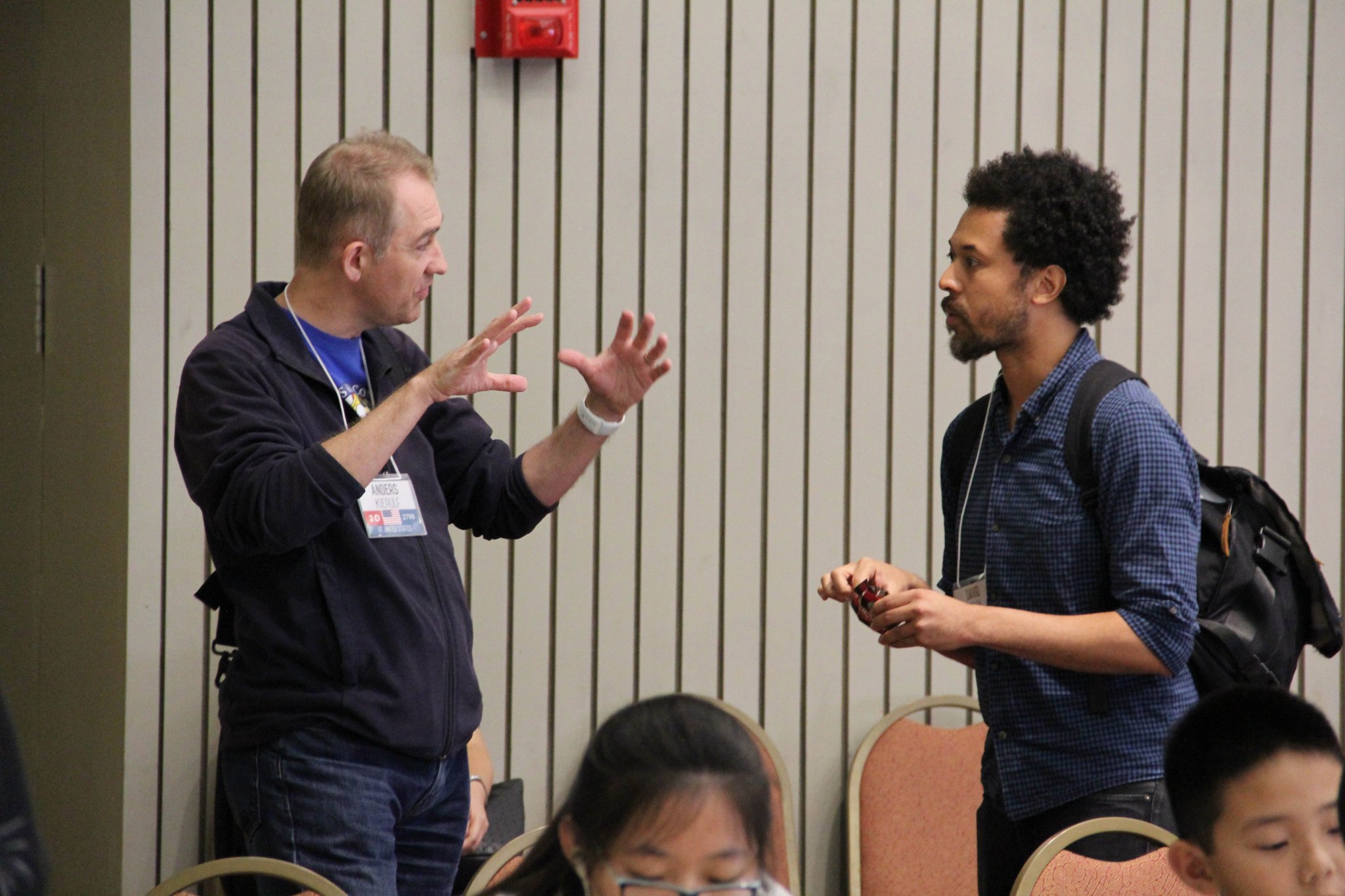 Unbeknownst to me Anders Kierulf was behind me observing the games. After the Lee Dahye review he introduced himself. It was our first time to meet in person and we had a very nice friendly conversation about the awesomeness that is the US Go Congress (he’s a veteran) as well as SmartGo Kifu and SmartGo Books, two fantastic bits of Go software I can now no longer imagine living without. Thanks to Nathan Eagle for clandestinely snapping this photo! 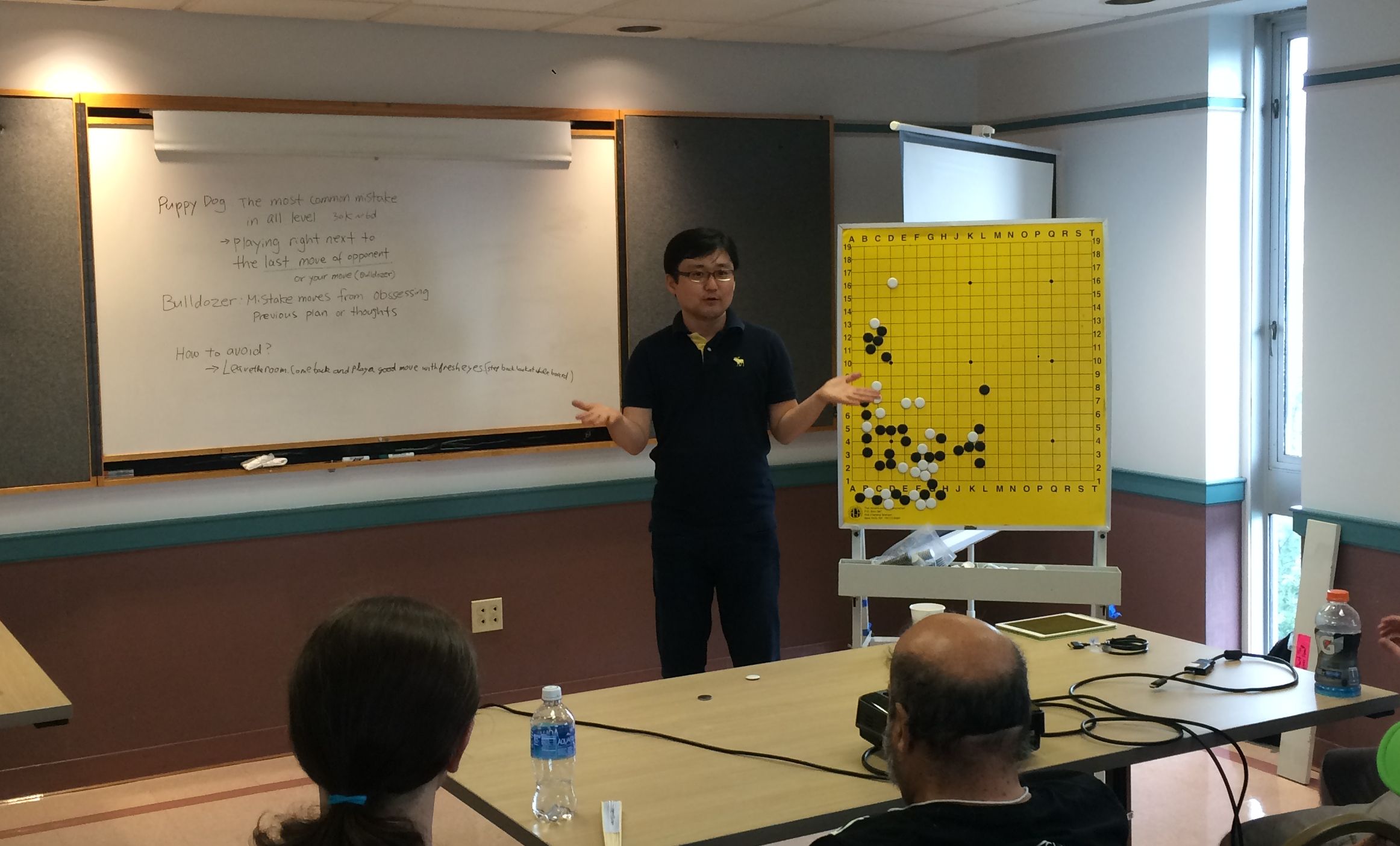 After our chat I swung by Kim Myungwan’s lecture titled Puppydogs & Bulldozers. This was a really fantastic talk that applies to pretty much any game whether you’ve just learned or you’re an amateur 6 dan. Kim categorized Puppydog play as mindlessly responding to your opponent without taking the time to assess the whole board. The Bulldozer play is when you stubbornly persist in a plan which obviously isn’t working. As Lee Sedol sez, Go is full of “twists and shakes” and it’s probably best not to drive off the side of the mountain. I intend to keep to this mind in the remaining four rounds of the US Open.

During a five minute break during the lecture I had a chance to chat very briefly with Brady Daniels of Brady’s Blunders who was sitting right behind me!

I scoped out the Evening League but I didn’t feel particularly inclined to play. I checked in with another Mostly Go friend, Harry Teitelman, and he was in the lounge area playing a kind of consulting/teaching game where everyone was exploring various lines of play for black and white. Jonathan Hop 4D, author of the So You Want To Play Go? series as well as translator of excellent NHK content was participating as well. It was basically a 4-5 person impromptu study group and we all had a lot of fun and I learned a lot.

Around 9pm things started winding down. After a couple of pizza slices with Harry I headed back to the AirBnB. The evening ended with a lot of memorable chatting on a Boston rooftop about the beauty and mystery of Go with Ien and one of his old MIT buddies who has a budding interest in the game.

It was jam-packed day and once again I’m turning in to recharge for my game tomorrow.