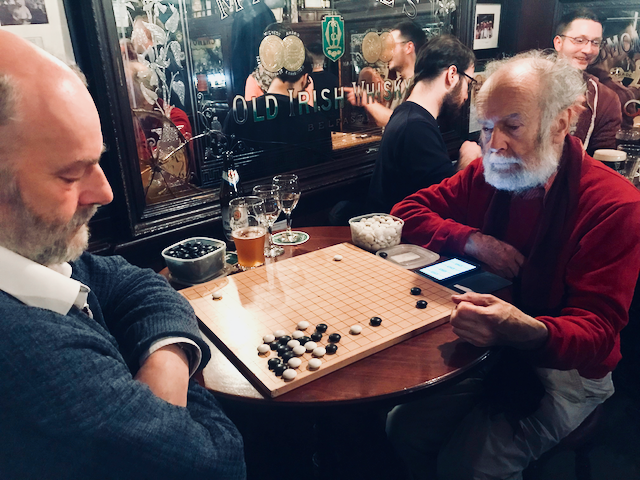 Back in February, I visited Dublin and had an opportunity to check out the local Go scene. After consulting the information on the Irish Go Association website, I decided to give a visit to the Collegians Go Club which meets 8pm on Wednesday’s at Toners off Baggot street. I arrived shortly after 9pm to a very bustling, very Irish pub. I made my way further in to find a few people playing Go including the gentlemen pictured above. The man on the right was John Gibson, the treasurer of the Irish Go Association.

I said hello and we talked as they played. They were excited that I knew something about the game and they paired me with a friend who was said to be around 4-5 kyu. They handed us a nice tournament board, two plastic bowls of Ing stones, and a mechanical game clock. I ordered a pint of Guinness and we found a cozy spot elsewhere in the pub and started our game.

Our game lasted about an hour and half. I overplayed a bit and was struggling, but my opponent made a strategic error in the later half of the middlegame and the game was pretty much decided from that point on. My opponent was very sweet and was a bit of a Go philosopher and enjoyed talking about the deep connections between the game and life.

By the time we finished the pub was emptying out and it was getting quite late. I said goodbye to everyone and headed off after a very enjoyable and memorable evening of Go.

In other news, I’ll be starting my sixth season of American Yunguseng Dojang this month. This will be the final season of AYD before the U.S. Go Congress, which I plan on attending with my buddy Ien Cheng. AYD has been going well - I went 5-0 twice in League G and my AYD rating is steadily climbing. My main issue continues to be playing too slowly but there’s been some visible improvement in that area and I’m challenging myself to do better this season. Easy tsumego, fast games continue to form the foundation of my study and this consistent and persistent approach appears to be paying off.