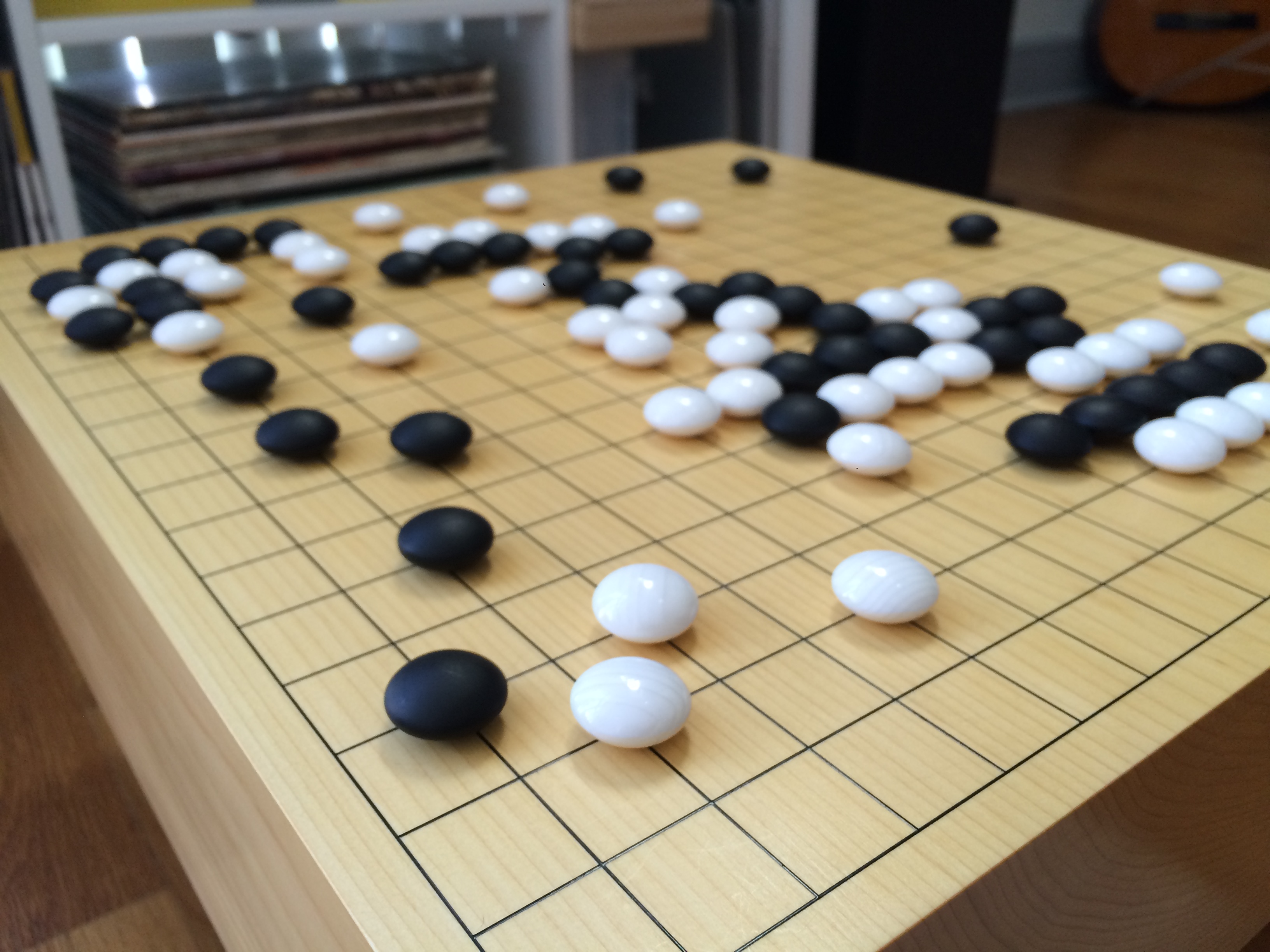 When I first picked up playing Go about 14 years ago, I marveled at the beauty of higher quality Japanese Go equipment on display at online shops like Kiseido and Kuroki Goishi Ten(KGT). But pragmatism and the pocketbook conspired to ground such flights of fancy, so like most budding enthusiasts, I started out with an inexpensive but playable set. While I don’t recall the exact details now, it was likely a set composed of size 32 or 33 glass stones with plastic bowls and a beechwood board. Shortly thereafter I acquired as a gift an older set comprised of a wooden folding board, a pair of wooden bowls, and Chinese style flat slate and shell stones that were in very bad shape. Unfortunately neither of these sets got much use due to my lack of Go playing friends and my 15 kyu understanding of the game simply didn’t warrant more involved forms of study. A couple of years later a move to New York and consequently more pressing life goals took precedence over my hobby and I really didn’t play at all for a very long time and my sets collected dust.

Then somehow I found myself with a dream job working for the New York Times which required a 40 minute daily commute to and from Brooklyn. Suffice to say I blew through many novels but I also spent a lot of time solving tsumego, playing 9x9 against the computer, and reading my favorite Go books all thanks to SmartGo. In the cramped space of a metropolitan rush hour peering at a small screen, I remembered why I had fallen in love with this game so many years ago.

While I still didn’t have any Go playing friends, investing in a nicer set felt like a kind of commitment or promise to myself. BenGoZen’s excellent guide on caring for yunzi stones pushed me over the edge and I decided to go for a nice Yellow Mountain Imports set - size 33 double convex yunzi stones, mahogany bowls, and a 2.4 inch shin-kaya board. This is a supremely playable set that has grown with my deepening interest in the game; four years later I’m constantly using it for reviewing commented games, studying joseki, investigating haengma, and solving harder go problems. Also something called AlphaGo and other recent serendipities means I now have a few Go playing friends to meet over this rock solid set.

For some time I had said to myself I wouldn’t purchase a high quality set until I achieved shodan. But these days I no longer really see shodan as a particularly interesting goal, that is, I now know that as soon as I arrive I won’t be satisfied and will be eager to reach yet a higher level.

So when Kuroki Goishi announced a centenary special with various sets at a steep 40% discount I made the leap. One week later I have in my possession a work of art. The set came at a pretty steep price but honestly I’ve spent more on laptop computers and as somebody who is a technology professional, laptops are the kind of thing you purchase once every two or three years. On the other hand this Go set far surpasses the beauty of Johnny Ive designed hardware and it’s more or less guaranteed to last me the rest of my life. 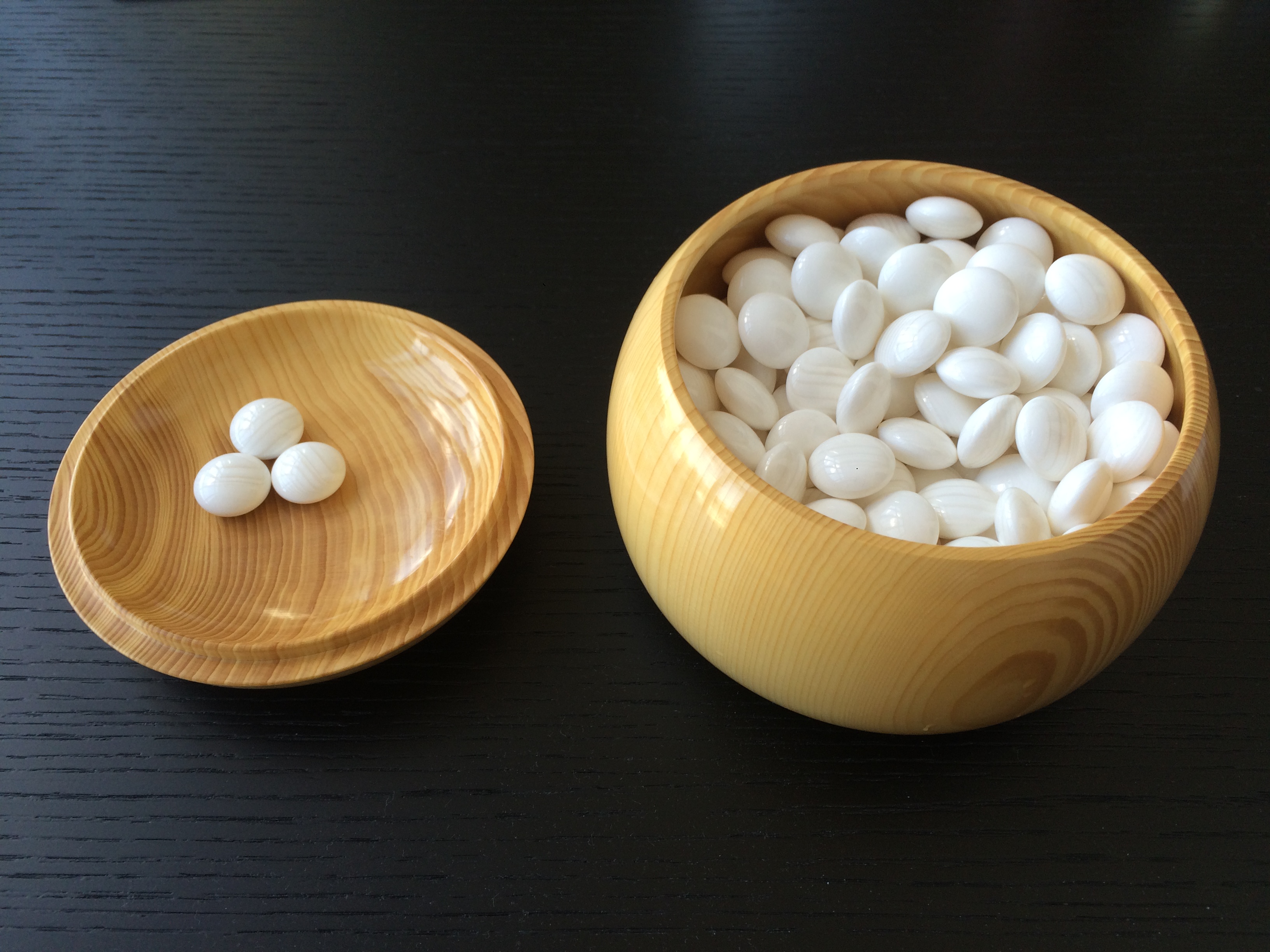 The bowls are XXL Hyuga Kaya bowls to accommodate the unusual size of the stones. The grain is stunning and hopefully the photos communicate some of that. The bowls, as with pretty much everything else, look considerably more incredible in real life than the images I saw on the KGT shop (or even the ones I’ve taken here). 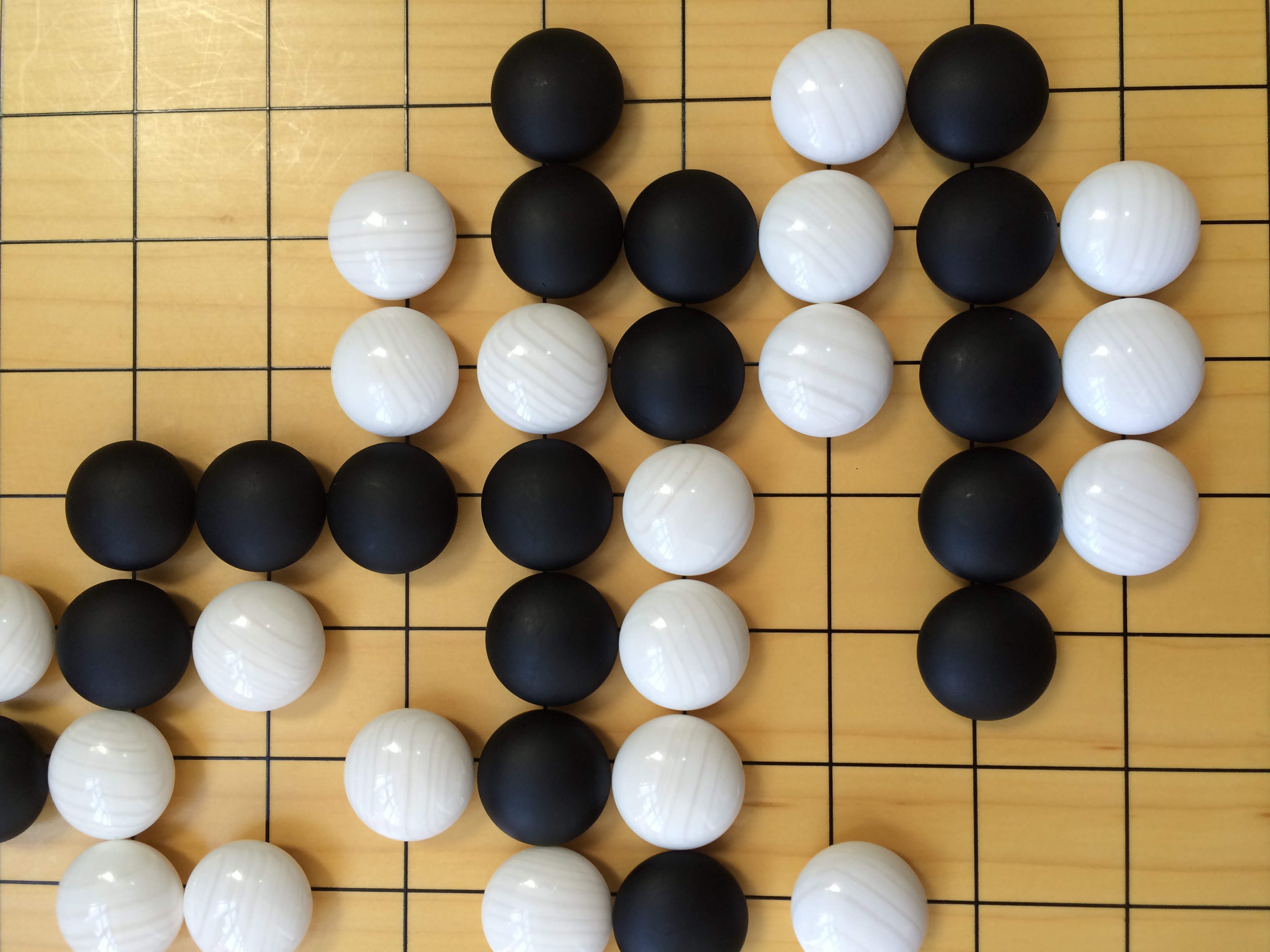 The stones are size 41 (11.6mm) Blue Label slate and shell stones. They are huge, far larger than anything I’ve ever played with before. Without a doubt my fingers will need to get used to holding such large stones confidently. But even after just one day they are growing on me and the aesthetic quality they bring to the the board is sublime. These are Blue Label stones so they are not particularly consistent with respect to grain. But that kind of captures what I find most appealing about this set - while it’s gorgeous to behold it’s not so gorgeous that I feel afraid to play it. In fact quite the opposite, the heft and sheen of these stones are constantly calling me out to work through just one more game, just one more tsumego, or just one more haengma problem. The surface of the goban already has the tell-tale dents of confidently clicked stones and this is just as it should be. 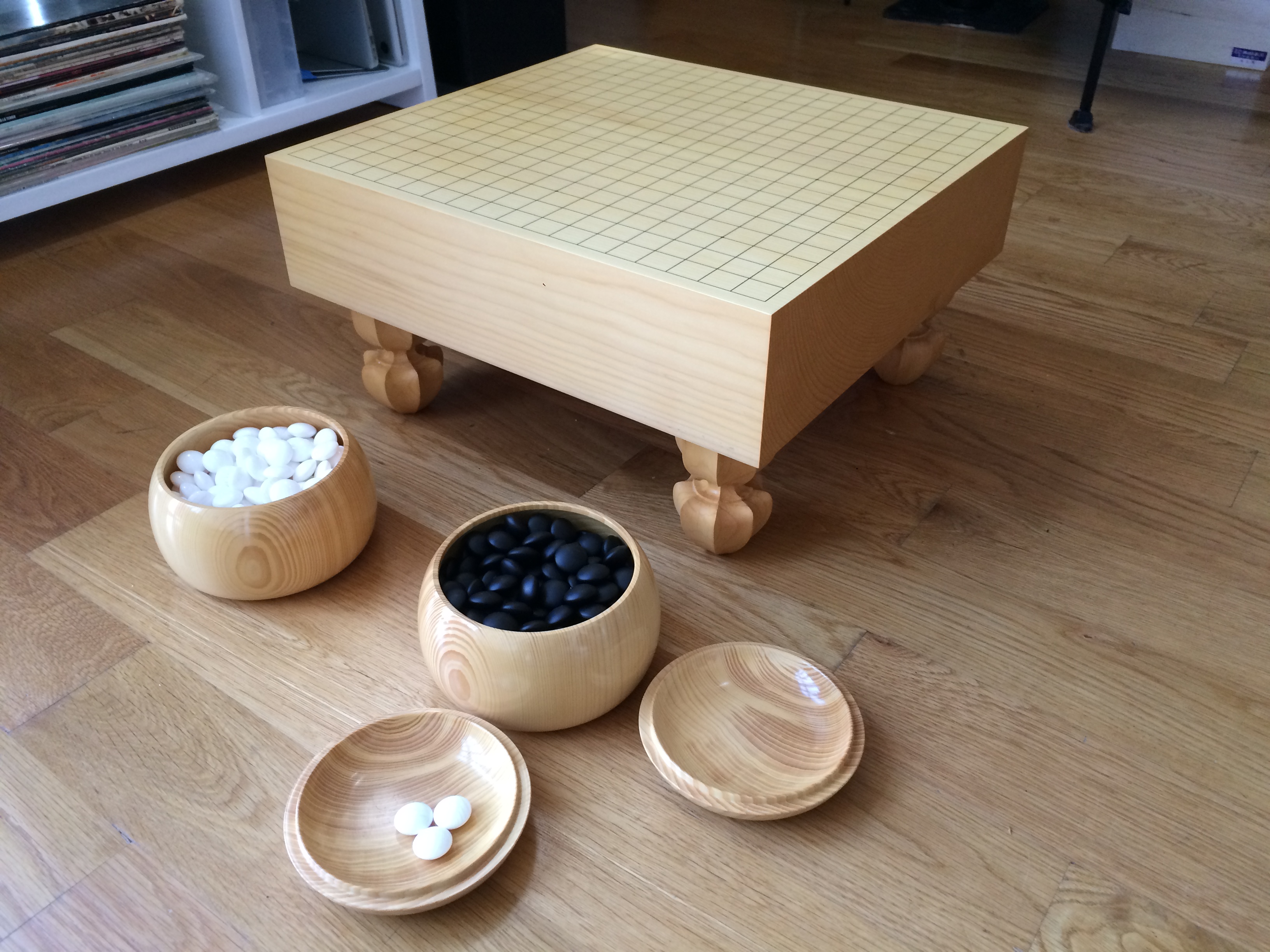 I admit the board was the one part I was expecting to be somewhat underwhelmed by - the images on KGT were a bit grainy and compared to some of the other floor boards there this one appeared quite plain. But if anything this speaks to the incredible level of Kuroki Goishi’s craft - the goban is just as beautiful as every other element of this set.

The goban shipped with a paulownia cover as well as a simple cloth covering. The moment the paulownia cover came off my apartment filled with the sweet scent of kaya. The board itself is far more golden than the KGT shop pictures let on, and as expected the lines of the board are raised and I assume they were made with the same samurai sword technique as shown in the various KGT youtube videos.

I was somewhat concerned about the height of the board but after reviewing a Go Seigen game and a Shusaku game for about an hour and a half and I didn’t feel particularly fatigued from looking down at the board. 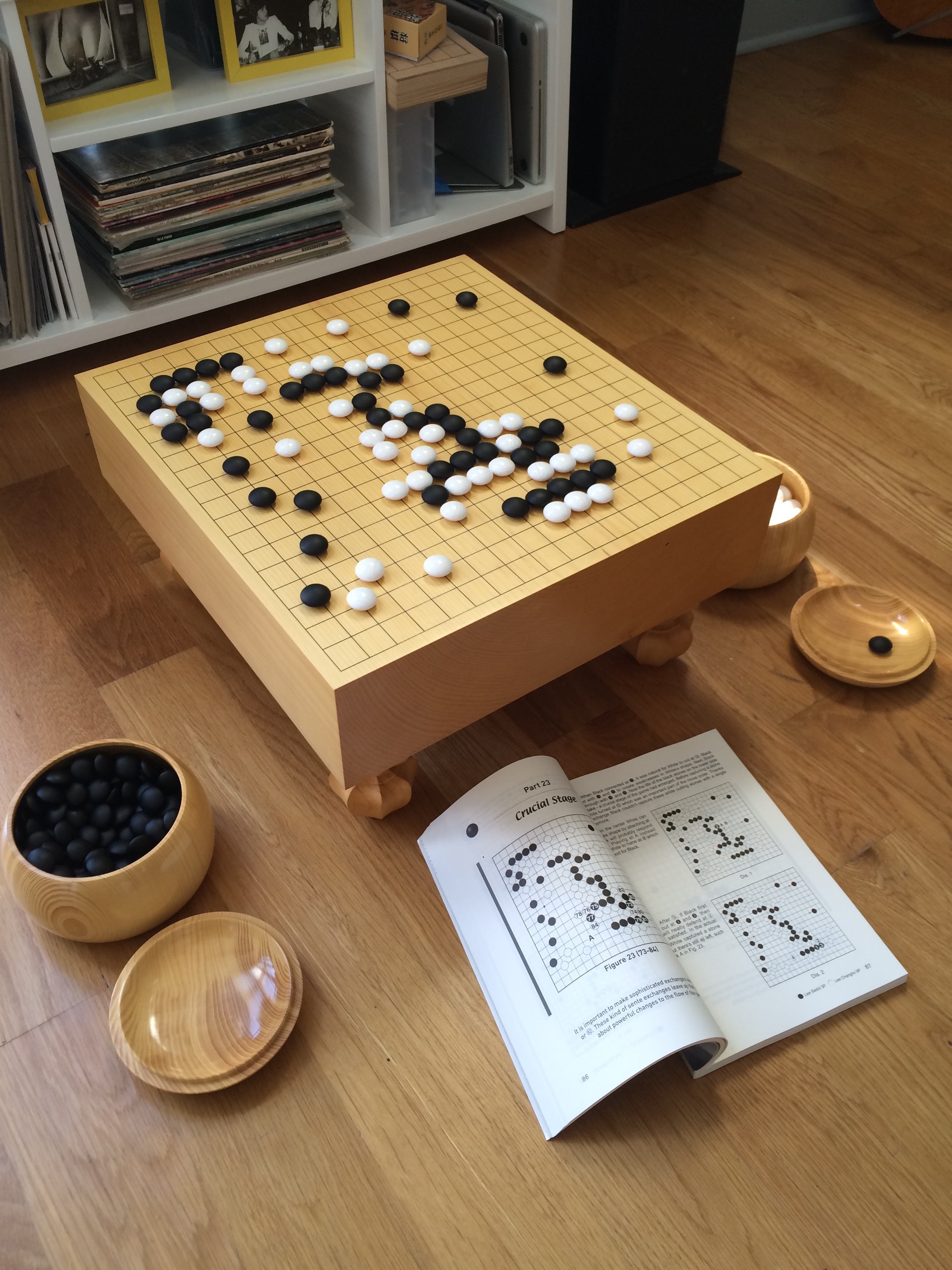 The experience of interacting with Kuroki Goishi was stellar and delightfully straightforward. Everything was expertly packed into one large box and none of the items show any sign of damage during the trip from Hyuga to Brooklyn.

While I don’t think I’ll be making any more serious purchases from them anytime in the near future the whole experience was incredibly positive and I feel like I’ve acquired a genuine piece of art. In the same way a great guitar demands to be played, this set also demands to be played and I will be more than happy to oblige for years to come.